The Chancellor of the Exchequer, Philip Hammond, announced his Spring Budget to Parliament on Wednesday, 8th March 2017. 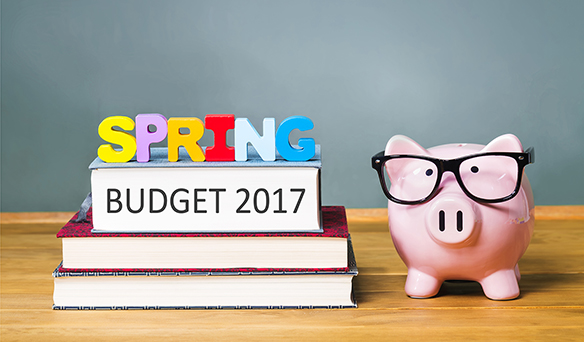 In today’s announcements, small business owners were big targets and were left feeling like they are shouldering more than their fair share of the financial burden.

The key changes announced in this final Spring Budget that will affect small businesses were:

In this summary, we explain the focal points of Budget 2017 for small business owners and remind you of some changes that have already been announced and are due to be introduced soon.

The Government confirmed its intention to lower the Corporation Tax rate to 19% from April 2017 and 17% by 2020. However, it is reducing the tax-free Dividend Allowance for directors-shareholders from £5,000 to £2,000 with effect from April 2018.

The abolition of the Dividend Tax Credit marked the end of so-called ‘tax-free dividends’ for basic rate taxpayers.

This subsequent reduction in the Dividend Allowance will further increase the cost of extracting income from owner-managed companies even though they will be paying less Corporation Tax.

There will also be a number of consultations looking at certain benefits in kind provided to employees and ways to make the tax system easier to understand.

In the March 2015 Budget, the Government announced its plans to modernise the tax system through technology and end the need for annual tax returns under the banner Making Tax Digital. Instead, taxpayers and businesses subject to certain criteria will be expected to update their affairs with HM Revenue & Customs quarterly, online, through bookkeeping software.

In today’s Budget, the Chancellor announced that Making Tax Digital would be deferred by one year until April 2019 for unincorporated businesses and landlords with turnover below the VAT registration threshold. This will provide them with more time to prepare for digital record keeping and quarterly updates.

For businesses, self-employed people and landlords, the Making Tax Digital timetable is now as follows:

Businesses, self-employed people and landlords with turnovers under £10,000 are exempt from these requirements. Those in employment who have secondary income of more than £10,000 per year through self-employment or property will also be required to use the digital service.

The Government will also consult on the design aspects of the tax administration system, including interest and penalties.

Presently, you can use the cash basis if you:

If you have more than one business and opt to use the cash basis, you must apply it to all your businesses provided the combined turnover from your businesses is less than £83,000.

Using the cash basis means you only need to declare money when it comes in and out of your business. At the end of the tax year, you won’t have to pay tax on money you didn’t receive in the period. And previously, businesses could continue to use the scheme provided their total business income was below £166,000 per year.

In today’s Budget, it was announced that with affect from the 2017/18 tax year:

The Government also plans to simplify the rules on capital and revenue expenditure within the cash basis, to make it easier for businesses to work out whether their expenditure is deductible for tax.

These changes to the cash basis are all in support of Making Tax Digital.

At Budget 2016, the Government announced reductions in business rates, including permanently doubling Small Business Rate Relief and extending the thresholds of the relief to ensure that 600,000 businesses wouldn’t pay business rates.

A long-awaited business rates revaluation will take effect in England from April 2017. In addition to the £3.6 billion transitional relief which was announced in November 2016, the Government will provide £435 million of further support for businesses facing significant increases in bills because of the revaluation. This includes:

At Budget 2016, the Government announced an aim to deliver more frequent revaluations of properties – at least every 3 years. The Government will set out its preferred approach for delivering this aim at Autumn Budget 2017 and will consult ahead of the next revaluation in 2022.

The Government will consult on proposals to redesign rent-a-room relief, to ensure it is better targeted to support longer-term lettings. This will align the relief more closely with its intended purpose to increase supply of affordable long-term lodgings. It may mean that rent-a-room will no longer be available to guest houses and B&Bs in future.